In numerical linear algebra, we create ways for a computer to solve a linear system of equations

. In doing so, we analyze how efficiently and accurately we can find the solution

Perturbation theory concerns how much error we incur in the solution

when we perturb (spoil) the data

. A classic statement tells us that the amount of error depends on the condition number of the matrix

I will define and prove the statement, and help you understand it by “hearing” it.

(otherwise, we get the trivial case

denotes the true solution. It’s what we hope to get.

Suppose, instead, we solve the perturbed system,

We seek to find a bound on the error

. We expect the error to be small when

Given an induced matrix norm

, we can define the condition number of

Note that we always have

. You can check why, along with the definition and properties of an induced matrix norm, in Notes.

We will show that, under a mild assumption

The RHS is a product of terms, so we can conclude two things. (1) If

is a small number, then small relative errors in

will result in a small relative error in the solution

is a large number, however, we may get a large relative error in

even when the relative errors in

We see that the condition number influences how much change occurs in the output when we change the input of a system. As a result, we say that the matrix

is small, and ill-conditioned if

is nonsingular, and its inverse is given by

To prove (i), we check that

. We just need to check one of them because, in finite dimensions, injectivity and surjectivity occur together.

Note, to be rigorous, we would first show that the infinite series

converges. The sequence of finite sums,

, is a Cauchy sequence in the norm

is a Banach space, i.e. complete, the sequence converges.

Let’s prove (ii). By triangle inequality and the properties of an induced matrix norm,

Next, we use the infinite geometric sum formula: For any real number

is nonsingular. Assume further that,

is nonsingular, we can write

is nonsingular, if and only if,

is nonsingular. Let’s show that the latter is true by applying (i) from Step 1.

Subtract the two equations to get,

Take the vector norm to both sides:

Finally, we divide both sides by

Let’s find an upper bound for 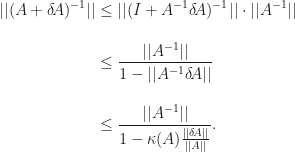 We can represent an audio as a vector

of frequencies. The provided audio file, williams.wav, lends to

For computational efficiency, we will write

, by storing the first 10 entries of

as the first column of

Next, we apply a nonsingular matrix

to get the encrypted audio

. We can always vectorize

by reversing the storage process described above.

From now on, we assume that we only have

. We seek to decrypt the audio, i.e. solve the equation

, when there are perturbations in the matrix

and/or in the input

To generate a well-conditioned

, we find the QR factorization of a random

. We know that the 2-norm of an orthogonal matrix is always 1. Hence,

, we use the Hilbert matrix 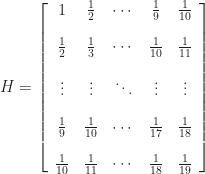 The entries of perturbations

are randomly generated from a scaled normal distribution. For convenience, we will assume that

is (most likely) nonsingular because

We are more interested in ensuring that the values of

stay about the same each time we run the program.

We can run perturbation_theory.m under 6 different cases:

The table lists the input parameters for each case.

First, let’s consider what happens when

These plots show that the obtained solution

well. The fidelity of the obtained audios remains largely pristine. We do hear some added noise. In the 100 ms sample, the relative error stays around 2% (median) when we perturb only the matrix

. When we perturb the encrypted audio

, the relative error jumps to about 10%.

Next, let’s consider what happens when

This time, the obtained solution hardly matches the true solution. You can hear much more noise in the obtained audios, and listening to them becomes almost unbearable. The relative error is orders of magnitude larger. It’s interesting how perturbing

only results in a completely garbled audio, but perturbing

in addition reconstructs some of the original audio. Two wrongs do make a right, it seems.

We can also check that our matrices satisfy the statement that we painstakingly proved. I will leave writing the extra code to you.

Given a vector norm

, we can always create a matrix norm

. As a result, we call this an “induced” matrix norm. For simplicity, I use the double bar notation for both types of norms. It is clear from context whether we are looking at the vector norm or the induced matrix norm.

The induced matrix norm of

Hence, the induced matrix norm measures how far out we can map a vector relative to its original size. We can also generalize the definition to rectangular matrices.

Because of its definition, the induced matrix norm satisfies these useful properties:

In particular, property (ii) implies that the condition number of a nonsingular matrix is always at least 1.

You can find the code and audio files in their entirety here:
Download from GitHub