. Let us now design the constraints; they will be linear equations and linear inequalities that the entries of

must satisfy according to the nonogram. The only information that the nonogram provides are the row and column sequences, so we want to make the most of it. Afterwards, we obtain the sparse vector

by minimizing its 1-norm under these constraints. I will discuss the code and the results in the next and final post.

and for some vectors

. We will determine how large

are at the end.

Note that, by definition, the 1-norm of a vector is the sum of its entries in magnitude:

(these are the basis vectors

in their natural order) are either 0 or 1, and both of these values are nonnegative. Therefore, we can write instead,

Matlab needs us to write the objective function as a linear combination of the solution vector’s entries. The equation above shows that

is a linear combination of the entries of

Unlike in most optimization problems, we know the minimum value that our objective function

should reach. It is equal to the sparsity level

equals how many numbers appear in the row sequences, so we know its value.)

We pass this information to our solver as a linear equation:

We can write this as a matrix equation

matrix whose entries are all 1, and

is a vector with just one entry,

. From the column sequence

, we can find the column sum

. Recall that the column sum tells us how many cells on the

-th column must be shaded. There are

basis vectors, and we want exactly

among them to pass the

Well, which basis vectors can pass the

-th column? To answer this question, we consider one of the rows. We can list the basis vectors that pass the

-th column in the following manner:

have we considered above? Clearly,

, i.e. for each block size, there exists a basis vector that passes the

, the starting column index? The lowest that

can be and still allow the basis vector to pass the

. From our list of basis vectors above, we conclude

. It is possible that this number is less than 1, which would not make sense. We stop this from happening by selecting the larger between

. We saw this number when we designed the basis vectors last time. If this number is greater than

, then the basis vector would start somewhere after the

-th column instead of passing it. Therefore, we consider the smaller between

In summary, the basis vectors

-th column are those whose indices satisfy,

-th column sum is satisfied if we require that

. Their entries are given by,

The 1’s on the first row of

are the column sums.

Let us now consider the row sequences. Consider the

. From the row sequence, we can determine

, how many times blocks of size

should appear on the

We write the following equations for the

These equations are true, since the left-hand side counts how many basis vectors of size

we use, and this must equal how many times

appears in the row sequence. We use the natural order and arrive at

For the stylish lambda, we find that

. Their entries are shown below (see if you can make sense of them): 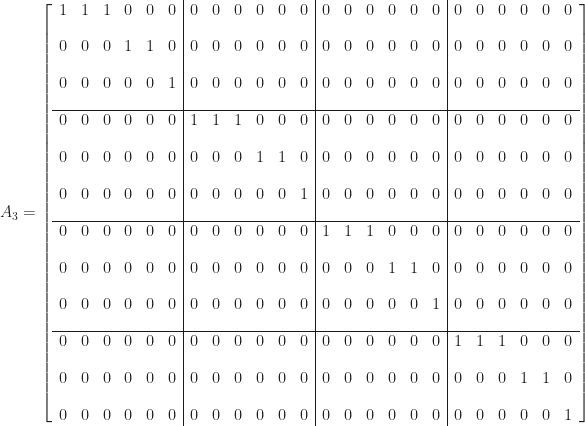 One of the rules of nonogram is that we must have at least one empty cell between two consecutive blocks of shaded cells. Necessarily, certain basis vectors

on the same row cannot appear together. We cannot have

take on binary values, we can require that

to force one of the two variables to be zero.

The stylish lambda, which has 3 columns, lends these inequalities for each row:

Can you see a problem here? There are a total of 56 inequalities but only 24 unknown variables! We would be liars to call our approach compressive sensing when we make these many measurements. In general, the number of such inequalities is,

We arrive at a new insight by considering the following picture:

The picture looks similar to the one from Section 4b, where we considered all basis vectors that pass the

-th column. The only difference is that we added basis vectors that start at the

-th column. We call these basis vectors mutually exclusive, because no pair among them should occur together. Check it!

, we can ensure that the basis vectors are mutually exclusive with a linear inequality:

We have such inequalities for each row, for a total of

constraints. We can use the natural order to write

matrix. We are truly lucky that our solution vector takes binary values. How else could we combine (compress, heh)

amount of information into just 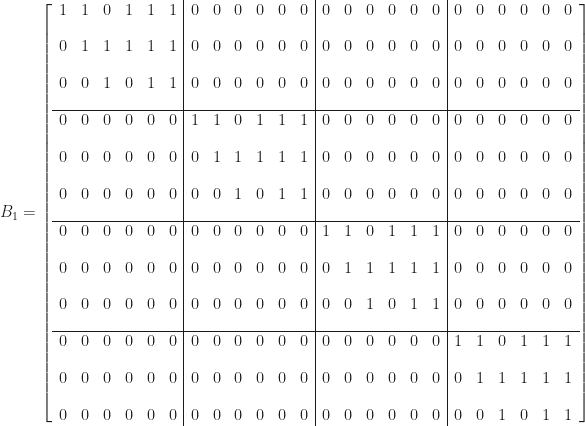 Another rule of nonogram is that we must shade blocks of cells in the right order. For example, a row sequence of

Suppose that we have

columns and the row sequence

. Consider the first block, of 1 cell. Where can the corresponding basis vector

appear? The block is the first in the sequence, so the lowest

can be is 1. Moreover, a block of 2 cells is to follow afterward, so the highest

can be is limited. Imagine what would happen if the second block is “pushed to the end.”

Next, consider where the second block

If we push the preceding block of 1 cell to the end, then the earliest the second block can start is on the 3rd column. That is,

must be at least 3. There are no blocks after the second block, so

can be at most

We can make sure that the block of 1 cell appears first with two linear inequalities:

Notice that the coefficient of each

is its starting column index

The good news is, this works for any sequence whose block sizes appear only once. On the other hand, if there is a repeat in the block size, the corresponding inequality may not even be satisfied by the true solution. This can happen when two blocks of the same size are supposed to be close to each other. Two (maybe more) basis vectors on one side of the inequality then equal 1, and the resulting linear combination no longer represents the starting column index.

We now consider another approach, one that is necessarily true for all sequences (i.e. regardless of whether block sizes repeat), but creates a weaker statement and does not guarantee that the blocks appear in the right order.

. If we have 8 columns, where can each block appear?

From the picture above, we see that,

As in Section 4c, the linear combination with coefficients of 1 counts how many blocks of a particular size appear. We used logic to narrow down the range where the blocks can appear. For certain, there is at least 1 block of that size in this range.

The upper bound is determined by how many other blocks of the same size appear in the range (i.e. number of overlaps among the ranges). For example, the upper bounds of

are 2, because we can place blocks of 1 cell on the 1st and 3rd columns (or on the 3rd and 5th columns) and the block of 2 cells afterward.

In summary, we follow this procedure for block order:

1. If the row sequence has only one number, then do nothing.

2. If the row sequence has block sizes that do not repeat, then for each pair of consecutive blocks, create 2 inequalities such as those shown in the first approach. This strongly enforces the order.

3. If the row sequence has blocks sizes that repeat, then for each block, create 2 inequalities such as those shown in the second approach. This weakly enforces the order.

We arrive at the inequality

. Note that we can change the strict inequalities in the first approach to inequalities with an equal sign if we add 1 to the smaller side. How large

is depends on the row sequences and differs from one nonogram to another. The most rows that

, when all row sequences have more than one number and have repeating block sizes.

The number of linear equality constraints is,

, that is required for sparse recovery.

Similarly, we can combine the linear inequalities into one inequality:

The number of linear inequality constraints depends on the nonogram. However, we have a bound for

Allow me to explain why, in compressive sensing, we want to minimize the 1-norm of the solution vector:

After all, isn’t the 2-norm of a vector (Euclidean distance)

-dimensional space, which may be hard to imagine. For now, just imagine a 2D space. Over there, the linear constraints

We want a solution

that lies on the line (meets the constraints) and has the smallest size (when measured in 1-norm or 2-norm). Define the

to be the set of all vectors whose 1-norm equals

, and similarly define the

-ball always takes the shape of a square diamond, and the

An intersection between the ball and the line represents a solution

. The solution that we want occurs when the ball is just small enough, so that, if it becomes any smaller, it would not intersect the line anywhere.

Notice that the minimizer

lies on an axis. We know that points on an axis have one coordinate that is equal to 0. Similarly, the minimizer (a vector) has one entry that is 0. This is in 2D. In

dimensions, the minimizer will likely have many entries that are 0, resulting in a vector that is sparse.

This time, the minimizer does not land on an axis. Its two entries are both nonzero. By the same token, in

dimensions, the minimizer will likely have many nonzero entries, resulting in a vector that is not sparse.