An n-gram is a word of length

that we can create from a set of letters. With two letters

stand for tails and

for heads, so that a 3-gram can represent an outcome if we flip a coin 3 times.

-grams. The game is simple and seemingly fair. Soon Player 1 will call off their long friendship and leave, however. We will find that, whenever

-gram, then Player 2 selects another. They record the

most current outcomes each time they toss a fair coin. The player whose

Show that, for any Player 1’s choice, Player 2 can select an

-gram that is more than 50% likely to occur first.

. We can use the digits of

as our fair coin. These digits are known to be nearly uniformly distributed. That is, for all intents and purposes, all ten digits are equally likely to occur. So,

if the digit is even, and

if the digit is odd.

What do we get?

appears first, after coin toss number five, Player 2 wins. Player 1 objects at this point. It should have been

if the digit is odd, and

Given Player 1 and Player 2’s choices, we want to find the probability that Player 2 wins. If we play Penney’s game

will be close to the exact probability that Player 2 wins. So the output of a simulation is whether Player 2 won or lost.

In fact, the code for a single Penney’s game is almost identical to that for craps:

On line 12, I used the Matlab command strcmp (“string compare”) to check if two strings are identical. In Python and R, the comparison operator == (“equals”) works fine, i.e. we can write player2_choice == three_gram and this returns a value of true or false. But when Matlab compares two arrays (like strings) using ==, it returns an array of true’s and false’s. Each value indicates whether a character from one string matched the character from the other. Since two strings are the same if all their characters match, we could write all(player2_choice == three_gram). Calling strcmp is simpler.

We can play a single Penney’s game. Let’s now use a loop to run the game many times and estimate the probability that Player 2 wins.

Notice that I declared a (user-defined) function on line 1. Not only do we want the winning probability when Player 1 selects

, but also for all other possible combinations of choices. Our code would be more structured and reusable if we allow sending player choices as an input to a function. The function calculates the probability that Player 2 wins under the circumstances, then returns the value to us as an output.

The table below shows probabilities that I obtained from running 10,000 simulations for each possible combination of choices. The row labels correspond to Player 1’s choices, and the column labels to Player 2’s choices.

Do you notice something striking? No matter what Player 1 selects, Player 2 can select another so that he has greater than 50% chance of winning. Depending on Player 1’s choice, Player 2 can win 66.7%

Yukata Nishiyama provides an elegant proof for how Player 2 wins with the exact probabilities that I listed above. Given Player 1’s choice, showing that Player 2’s optimal choice leads to a probability greater than 50% follows one of these three scenarios:

Player 1 wins only when the first three coin tosses are heads. There is a

chance that this occurs. In all other scenarios (they occur with a probability of

), a tails precedes a run of heads and Player 2 becomes the victor.

This time, Player 1 wins only from sequences such as

, and so on. Add the probabilities that these occur (recall the sum of a geometric series):

Hence, the probability that Player 2 wins is

We can ignore all initial tosses that are tails. So take the first toss to be heads, and consider what must happen in the subsequent tosses in order for Player 2 to win. Can you see why the following equation is true? (Again, a lot like craps!)

), Player 2 is guaranteed to win. If the second toss is tails, then as long as the third toss is also tails (the two events occur with a probability of

), the sequence starts over and Player 2 gets another try at a win. Solve for

We can easily modify our code to analyze 4-grams. The table below lists the optimal play by Player 2 and the corresponding winning probability, which I got from Monte Carlo simulation (with 10,000 simulations) and from Martin Gardner’s book “Time Travel and Other Mathematical Bewilderments.” 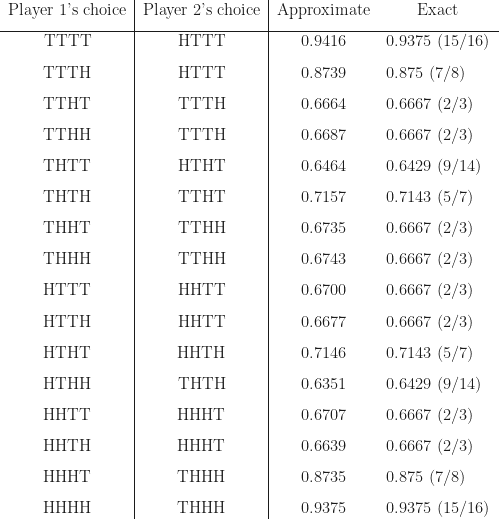 John Conway (the Game of Life man) developed an algorithm that finds the exact probability that Player 2 wins. It works on any

-gram, even when two players choose grams of different length! Unequal lengths provide additional insight to our game of waiting. For example, a 4-gram

is more likely to occur first than a 3-gram

The key to Conway’s algorithm is how he measures, what I’d call, “self-similarity” (how similar an

-gram is to itself) and “contra-similarity” (how similar the

-gram is to the other), and the difference

between these two numbers. We measure this difference from Player 1’s perspective and Player 2’s, and obtain

is the probability that Player 2 wins. Interestingly, Conway did not prove why his algorithm works. Even Gardner admitted to the following in his book:

“I have no idea why it works. It just cranks out the answer as if by magic, like so many of Conway’s other algorithms.”

Recently, Nishiyama gave a short proof using the idea of average wait time. His proof makes use of three theorems by Stanley Colling in a 1982 paper. At the time of writing this post, I could not find a copy of Colling’s paper to understand Nishiyama’s proof better.

You can find the code in its entirety and in other languages here:
Download from GitHub